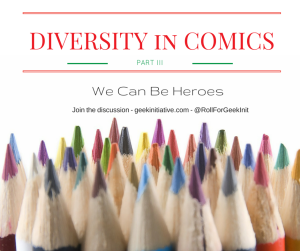 Welcome to The Geek Initiative’s three-part series about diversity in comics. This series explores feelings surrounding a wider representation in current comic books. For more perspectives on this issue, see part I and part II.

“Hey did you see that new Avengers movie yet? Captain America, Thor, Iron Man? Or how about even Incredible Hulk?” The first six movies put into production by Disney Marvel. Great movies, amazing stories, action sequences were a go, and the hidden love story showed tremendously. All of it was great, can’t make a complaint, right?

Growing up, you aspired to be one of these heroes. Everyone wanted to be Hulk because of his strength, Thor because of his godhood, Iron Man because let’s face it, being a billionaire, playboy, philanthropist, isn’t a bad lifestyle, and Captain America, the first Avenger. We all strived to see the amazing things these guys were and how they presented such awesome heroism in the face of danger and even certain death.

But how can I grow up to be any of these men? Then you have Batman, the man whose family was taken from him and made him an instant vigilante against people who would rather bring chaos than stand in order. Superman, the All-American boy scout, who believed in truth, justice and the American way. All amazing heroes to aspire to be, but how can I be any of them?

I’m a young Black-American and Puerto Rican male, who grew up with a dad who loved comics and had spread that love to me. But one thing I always noticed about my heroes was…they weren’t my heroes. Being a black male in America, it’s automatically assumed I’ll pursue some life in sports and entertainment, if I made it out the hood, and if I wasn’t shot by the age of 25.

But what if I wanted to be Tony Stark or Bruce Wayne? The comics that I read growing up limited that scope, because heroes weren’t strong black males, but strong, stoic, cis white men. Brunette or blond, brown or blue eyes, but always had that same milky complexion of a white man.

Now a days they’re turning some of these men into black figures. And now we have an uproar.

Then came Spawn, the ex-Marine who died and sold his soul to be able to protect his family and get revenge on the men who killed him. Static Shock, who had his own TV show for a while that always ended with a “the more you know” style of lesson at the end. But where are these heroes now?

I’m a rare breed, the ultimate black geek if you can say. I LARP at two different games, where one I’m actually plot staff on and the other I play a red-painted Minotaur. I am a huge gamer, willing to play anything beyond the stereotypical Call of Duty or any sports games that are out.

I read comics, watch anime, read manga, go to conventions, I do it all. But with all that I do, I see a limit of my people, and even those that I do see don’t know anything about our comic history or heroes. I one time spoke with a friend of mine and said “Hey bro, please tell me you read that Miles Morales Spider-Man comic?” He turned to me with a face on that looked both bewildered and confused, “Who’s Miles Morales and what comic?”

I was taken back a bit, but I just chalked it up to lack of knowledge so I explained that he was the new ultimate Spider-Man, he’s this black and Puerto Rican kid from Brooklyn, who gains Spider-Man’s abilities. He looked at me, this time more perturbed than anything, and said “Why did they make Spider-Man black? That’s just stupid.” Shock of it all, here I am talking to a fellow blerd (Black Nerd) and he shoots in the face the fact that we finally have a hero we can relate to and he’s a very popular one.

I walked away from the conversation a little perturbed myself, but then it hit me. We don’t support us. That’s why all of heroes are lost. Like why Black Panther is Phase 3. Why Rhodey was only shown in two Iron Man movies, though he is an Avenger and could have easily been in the Avengers movie. Or why Cyborg, who’s been around for years mind you, is now getting his push. WE don’t support our own. We lose all that we have because of it. Sure, now we have a black Captain America, but how long will he last?

We rant and rave that the industry only displays us as Denzel Washington Training Day, but the moment we get our heroes, we quit and walk away.

This is the POC geek signing off. Show love to our heroes.

This site uses Akismet to reduce spam. Learn how your comment data is processed.