Fairy tales need fixing. But when these surprisingly connected characters help themselves and each other during a summit in a nearby enchanted fae forest, will they fix the larger problems we all face in La Voilette? Join the live action and written story.

There is an insidious force in society that we often choose to ignore instead of name. It’s been called many things, but it’s often symbolized by the absence of a need: access to food or medicine, or a devastating climate and a need for a stable home.

Content warning: poverty, ugliness of society, self-harm, bullying, exclusion due to gender and/or sexuality, reference to abuse and escaping or avoiding abusive situations, colonization [as a force portrayed as wrong], patriarchy and patriarchal trauma

Can You Cure Corruption in La Voilette?

While King Francois of La Voilette pursues expansion of his kingdom at the expense of people across rivers and seas, his designs both influence and reflect what is creeping and wrong among La Voilette and its denizens. The Spinning Crones warned King Francois about it: so great grows this ill that it will manifest and seep into objects lost and found. Crowns, necklaces, mirrors, coins distributed widely among the people, and other symbols of status or excess. Then, it will infect even the most mundane but meaningful objects. 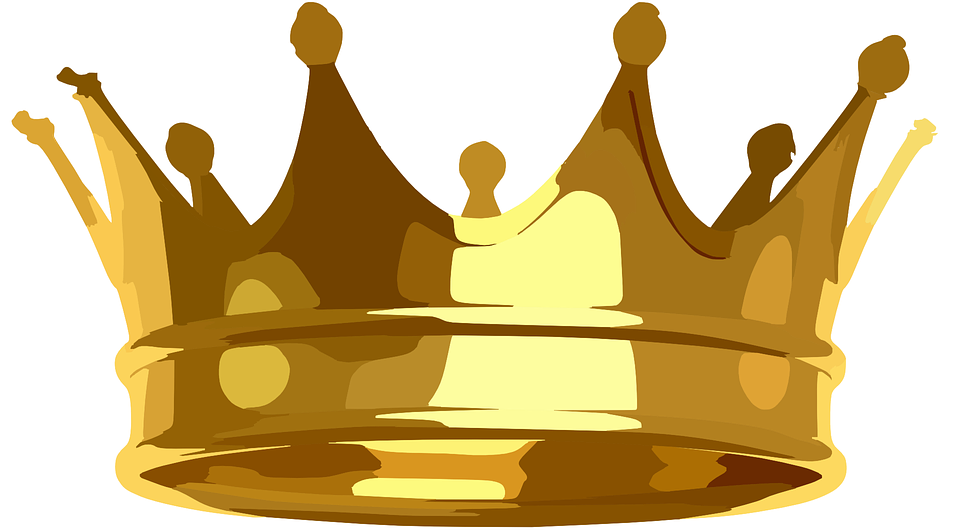 The Little Match Girl has no home, nor a warm place to sleep in La Voilette. She knows there’s a comforting vision she isn’t seeing. Her society tells her about it all the time, and being always on the streets selling matches, she hears it every day: if you think positively and work hard enough, you can envision what you need and attain it. This could lead to any end, but she realizes, as the cold takes sensation from her fingertips, that her cold hands had dropped the matches she was carrying hours ago. 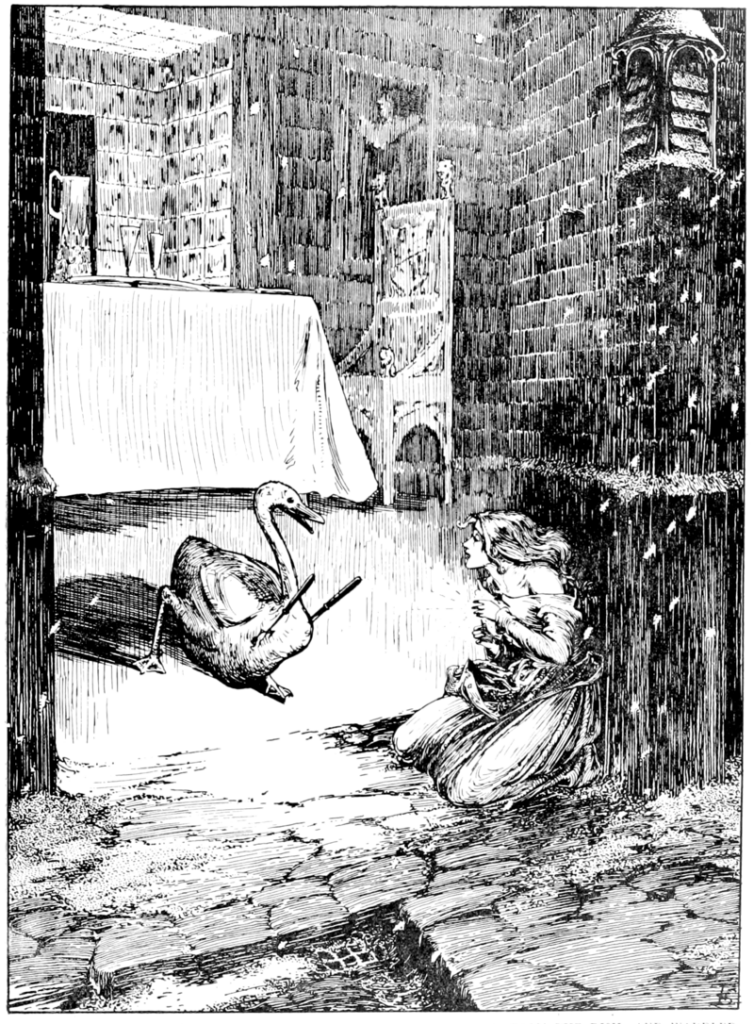 A mile away in La Voilette, a farm hand on an errand picks up matches he finds on the ground. It is one of the few found treasures he can give to a suffering child known as the Ugly Duckling. He brings them back and finds the Ugly Duckling near a pond by a stable, observing swans take flight.

The Ugly Duckling accepts the matches. Later that evening, they wave their hand over a match, eyes empty, match after match. It doesn’t hurt, but it should. No one sees the beauty of the child they called “The Ugly Duckling.” They know there are some secrets–secrets about their lineage and their place in the world. They access the castle library, reading books about religion, spirituality, and self-improvement. And yet, their reflection does not change. At long last, the Ugly Duckling sees shades of themself in the sitting monarch, and they decide to hold up their treasured mirror to the people below so they can see who is really ugly, but the mirror is gone. 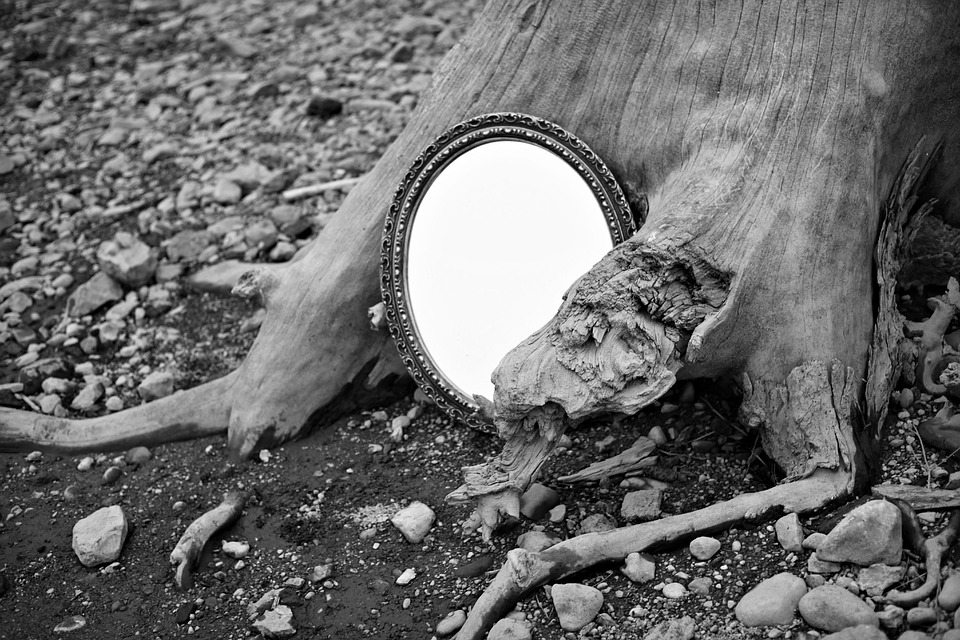 King Francois of La Voilette, however, has stolen the mirror, and he hangs it up on his wall, addressing it and imbuing it with magic he stole from his wife’s dying wishes. “Mirror, mirror, on the wall…” To his dismay, there are two people of envy, and they must be dealt with to ensure everyone likes him the most and follows his vision for an expansive empire. One, he finds, is his own unrecognized child, the unnamed Ugly Duckling; the other, he sees, is a youthful but strange young man–Talion, Sleeping Beauty.

Everyone makes fun of Talion for being different. He calls himself and other boys pretty. He doesn’t like parties. Though he sometimes participates in sport and enjoys riding the workhorse in the nearby meadow, Talion most prefers spending his time with the Spinning Crones, and has mastered the art of spinning intent into yarn. One day, he pricks his finger on the spindle and falls into a deep sleep. His fae folk friends bring a beautiful princess to wake him with a kiss, and yet, he slumbers. Where is the man who will both desire to kiss him–and find a way to win his permission before doing so?

The fae folk quest to obtain a beautiful, fresh rose. It is undying. The fae folk place the rose next to Talion’s bed while he sleeps, hoping the energy of the rose will inspire and awaken him.

Elsewhere, a woman named Beauty dreams of this same blooming flower. Beauty must embark on a quest to find this rose herself, lest she go through a fated trial of abuse and imprisonment at the hands of a Beast in exchange for her father’s life. Should Beast get the flower first, she will remain unfree, even in spirit. Should Beauty succeed, she will be free, and while she never wishes to see Beast, perhaps he can find another way to express himself besides heaping his own pain onto others. 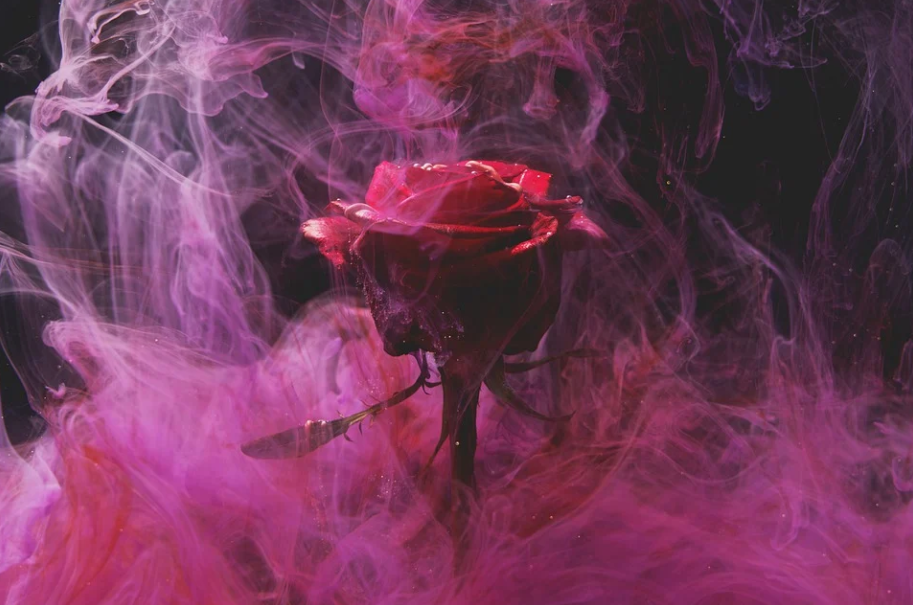 Will the movement and restoration of these shared objects make things right for the people who need help most, or must these individuals also create lasting change in the monarchy of La Voilette–and if so, how? When the fae folk ask these characters to meet at a summit in their forest, what will happen? 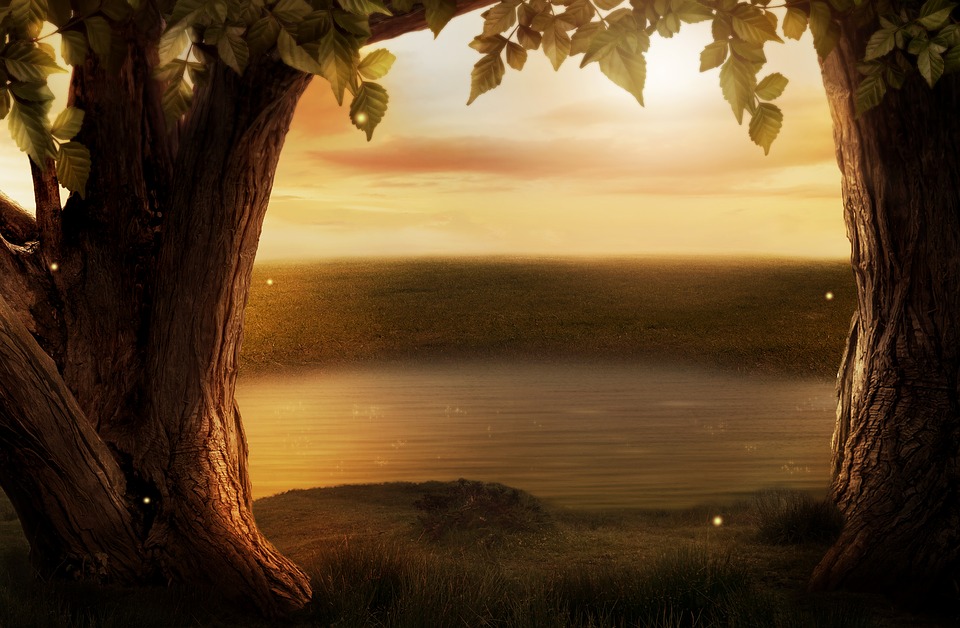 Game Designer and Writer Note Regarding Euro-Centricity and Game Inspiration

Because this collaborative story setting is largely an examination of Western society and facets of oppression it perpetuates, I have focused on, mixed, and varied fairy tales from Europe. My vision is through the lens of my own identity (disabled cis white heterosexual Irish-American woman), as well as the fairy-tale related media I have absorbed throughout my life (Disney, Once Upon a Time, various analog and digital games). This is about exploring and examining oppressive undercurrents in an oppressive society, and the myth that personal achievement, regardless of who you are, will create success for you in a place like the United States.

The initial exclusion of fairy tales originating from outside of Europe is intentional; this experience is intended to examine and potentially dismantle oppressive systems within/versus the offending and dominant culture of origin. Should you wish to play a character originating from another culture, you are more than welcome to do so. I do not feel comfortable dismantling, displacing, or appropriating global tales for critique, but characters from these tales are especially welcome to exist in La Voilette and dismantle oppressive systems.

This game is inspired by Mixed Up Mother Goose, a Sierra On-Line DOS game about fixing stories by returning people and items to their rightful places, and the various settings published and developed for feminine horror role playing game Bluebeard’s Bride, including my own original settings.

This collaborative storytelling experience will occur on Zoom in a facilitated format. Your facilitator will portray Titania, your fae host who has domain over the forest. Under her enchantment, no one can harm you here. This is a freeform guided storytelling adventure in which your decisions shape the outcome of your individual character’s story and your collective story: realistic, tragic, fantastical, freeing, or flawed.

Before and after the live event, each player may contribute a written story to be included in a publicly distributed (free to all) short collection of stories. This is borne out of the source material (often written down) and out of frequent player desire to prepare and express themselves through the characters.

Story length may be 50-2500 words and may include public domain photos or original art with a release. They can be written from any perspective and must include appropriate content warnings.

You may choose a character from any known fairy tale. Please see the designer’s note before committing to this story. You will receive a custom character with a one-page character sheet and ties based upon a character survey you will fill out.

You may choose to interact with other specific players. You will be given the option for preferred character ties with another player.

The first run of this story will impact the second run, as the entire story of Fixing Fairy Tales takes place in La Voilette.

When to Play Fixing Fairy Tales

Fixing Fairy tales will have two runs at times friendly to North American and European participants. Each run is limited to 8 participants, though non-player characters (NPCs) may appear. (All NPCs are paid for their work and time.)

[When is this in my time zone?]

Book Riot: What is the Aarne-Thompson Index?