Can you really blame people for wanting to interact with dinosaurs once it was discovered that they still lived in our world? Our fascination with dinosaurs has existed as long as we’ve understood the nature of the bones we’ve found in the earth. In this 3-4 hour live online video adventure, you will assume the role of an inhabitant of an island called Saurendipity, which is populated by dinosaurs. The creatures, resistant to being caged and put on display, rebel. It’s up to you to work with (or against) the others on the island to escape. Isolated by the emergency, you use the island’s video communication system to communicate and strategize, and each of you has unique abilities which can affect your rates of success.

This is a lighthearted, somewhat campy, light rules larp (live action role playing game). Each run takes place in a unique decade and we run the game on Zoom. You receive archetype characters (playable as any gender), with a personalized, bespoke paragraph to suit your gameplay preferences. Would you like to play as a rock and roll legend from the 1960s, a steampunk engineer from the 1880s, or a cyberpunk entrepreneur in the 2080s? The choice is yours. 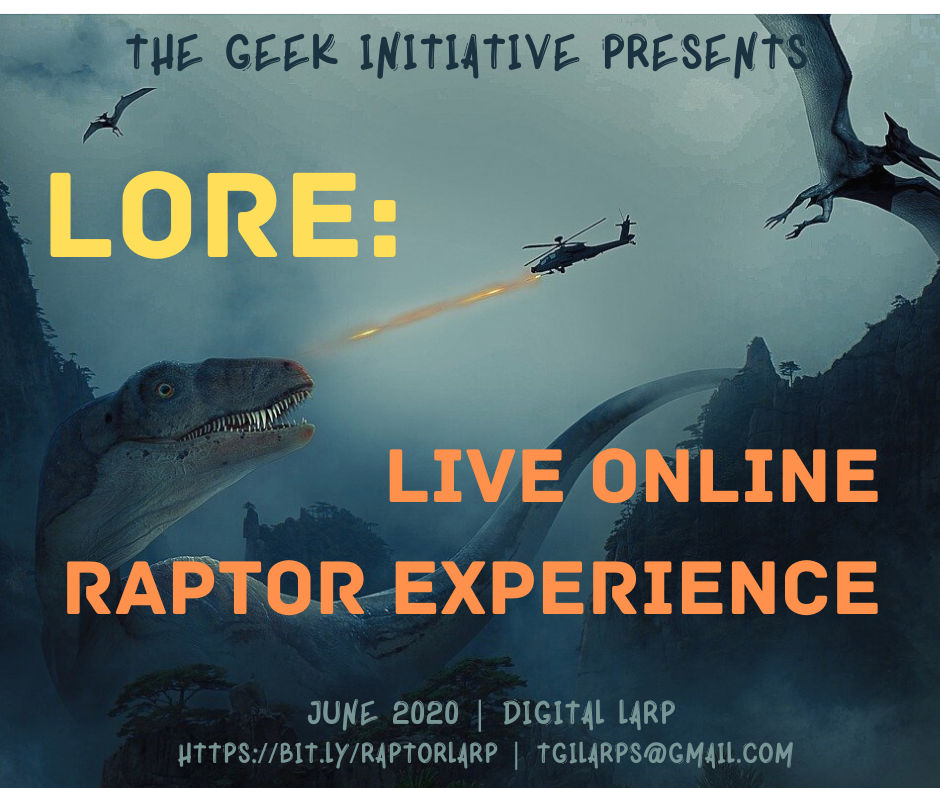 Is Live Online Raptor Experience for Me?

Content warnings include: animal harm, light violence/mauling of people, guns/light military presence, profanity, high-pressure situations. If you aren’t comfortable with these themes, this larp probably isn’t a great fit for you.

We do run games centered on safety and inclusion, believing that participants are more important than the games we’re playing. If this isn’t the right larp for you, reach out to us at tgilarps@gmail.com. We’ll help you find a better fit, whether it’s with us or someone else.

Some runs will be streamed on Penny for a Tale, a popular Twitch channel run by some fabulous people. This is for participants aged 18+. The larp is in English and will be broadcast on a mature stream (profanity allowed). The stream is moderated, but be aware that we are unable to control what viewers say. Offensive comments in the stream will be deleted.

This game is particularly friendly to new and experienced gamers alike. We welcome friends from all over the world. Please join us!

Live Online Raptor Experience is largely freeform roleplay structured on interpersonal connections. The communication is primarily in character: that is, people speak to each other as their characters over Zoom. However, there are also multiple resolution rounds. Players may use their abilities as creatively as they see fit, messaging the game master with their actions. During a short break, the game master reconciles all actions, then narrates outcomes in game, once roleplay resumes. At the close of the larp, we learn how many (if any!) characters successfully escape.

Generally, all characters want to help the dinosaurs (this isn’t a larp about murdering animals), but they will usually put human lives/survival higher on their list of priorities.

This larp includes safety, introduction, and debrief. You’ll also have optional sidequests, such as “obtain medical kit” and “rescue a kitten named Flips.”

You can play one of the following archetypes, which will be further customized for your preferences:

Characters are written so that players and characters can be of any gender. Named, established characters (such as Wexford) have gender-neutral names.

25% of the characters will be randomly granted a general piloting skill. At least one surviving/escaping person needs a piloting skill for people to leave island by plane, helicopter, boat, airship, etc. Most games will include 5-8 people, and not all roles are required.

The Lore of LORE: Game Story

It all started when oceanographer Jamie Lavern Wexford, inspired by legends of Nessie in Scotland’s Loch Ness, began seriously following up on reports of Nessie and other beings that resembled Plesiosaurs.

Wexford is a Quebecois individual of French, Scottish, and Irish descent living near the northern part of Lake Champlain, influenced by their grandparents’ tales of Champy, the local lake monster who is even legally protected by local governments in the United States and Canada. Upon further research, Wexford learned that for centuries, the Iroquois have also reported and respected the being later known as Champy.

Years later, Wexford was drawn to studying oceanography and earth science at the collegiate level. For a capstone project, they tracked down these various monster sightings and eventually learned of one in Mexico’s Bay of Campeche. Ridiculed by their peers, Wexford traveled to Mexico, hired a local guide, and interviewed witnesses. They located, tracked, photographed, and followed this actual, magnificent creature to an island in the Gulf of Mexico. From there, humans began building structures on the island to study dinosaurs, and to protect them from wider human interaction and poaching.

Unfortunately, the dinosaurs aren’t reacting well to artificial barriers, and they seem to be working together to destroy human made structures on the island! Will you survive?

Each game lasts a single session, 3-4 hours. It costs $28. We have done our best to accommodate multiple time zones, with weekend runs particularly accessible for both European and North American gamers. All times in Eastern Standard Time. Here’s a time zone converter–convert from Washington DC to your local time zone.

Each game will be entirely different depending on the group, and we’d love to have you more than once. If you’ve played previously and want a different role, we can guarantee that for you.

Purchase tickets to all runs here.

We are currently deciding which runs of LORE will be streamed. We will update as soon as we know.

Thank you! You are welcome to communicate with us directly in our Facebook group. Within a couple of weeks, you’ll receive a character survey asking about your preferences for gameplay. You’ll also get information about how to participate in Zoom, and the Zoom link.

What Do I Need?

You need a computer, phone, or tablet with a stable internet connection. You’ll need to be able to use Zoom software. For most scenarios, we recommend use of a headset. You will need regular access to your email prior to the larp, as this is how we will communicate with you. We reach out to the email you provide when you pay. It could also be helpful to have a notepad and paper nearby to take notes when things get intense.

Minimal preparation is required for the larp. You’ll have to watch our safety video, agree to our safety, consent, and inclusion policies, and consider a costume. That’s it. Just show up!

LORE: Live Online Raptor Experience game design and game mastering by Tara M. Clapper of The Geek Initiative Larps thanks to the ongoing support of the TGI community.

Resolution round mechanics by Terry C. of LARPed.com.

Research and image collection by Dylan W. of LARPed.com.

Creative consultation and support by Carrie B.

No dinosaurs, pugs, or kittens were harmed in the making of this larp.

Questions? Have you lost your job, or otherwise don’t have the cash? Email us for an accessibility ticket option: tgilarps@gmail.com.