“There’s only one hell, Princess, and it’s called Etsy.”

DISCLAIMER: This is a cautionary tale, not an anti-Etsy piece. There are many wonderful, honest sellers on the site with excellent items. Unfortunately, when the system breaks down, there’s not much of a safety net.

If I’ve learned anything from my latest Etsy experience, it’s that you need to be that annoying buyer. You know the one: they harass you for an update twice (or more) a week, are overly particular about the details, and don’t hesitate to open a dispute at the slightest sign of trouble.

You will hate working for this person. They will hate micromanaging everything. But hopefully, at the end of the project you will have an item that is acceptable to both parties.

Because unfortunately, it’s very easy for nice people to be taken advantage of on Etsy. I should know. I’m one of them.

It started out innocently enough – the first iteration of the dress I ordered had been made for someone much taller than me. My mother used to sew, so it was pretty obvious to me that the seller had used a standard pattern. Unfortunately, this wasn’t a muslin mockup, it was the actual dress! And as soon as I had an issue, the seller turned from Jekyll to Hyde.

She blamed me for not spelling out that a height of 5’1” makes me a petite size and accused me of screwing up my measurements. I had a friend help me retake them and nope, everything was fine on my end. So I sent the dress back pinned to fit, expecting I’d just need to add embellishments later to cover anything unsightly.

I’m not sure what I was expecting her to do with the dress – sewing machine magic? – but I definitely wasn’t expecting her to turn around and demand more money for new materials since she “didn’t know how” to fix the existing dress.

That was the first time I asked for a refund. However, there’s no magic button you can push and I really should have opened a dispute then and there. But when the seller offered to try again with leftover material from another project, I decided to be nice and let her have another chance. I’d already waited 2 months for the dress and it was probably too late to commission another one from a different seller and have it in time for summer LARP events.

Unfortunately, this dress also did not fit. For some reason I still can’t understand, she’d taken 4 inches out of the bust and then blamed me for “pinning it incorrectly.” Now, I’m not a physicist, but I’m pretty sure there’s some wonky stuff going on when the first dress easily zipped when pinned and I could not fit into the second one to save my life. 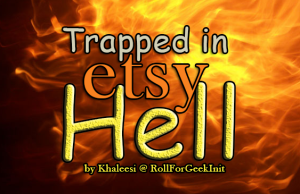 Once again, I asked for a refund, but the seller was on a two and a half week long vacation. You would think this puts the dispute period on pause, as it’s not fair to either buyer or seller to hold them responsible for communicating if the seller is not around. Unfortunately, Etsy doesn’t follow common sense in this regard and they don’t really spell it out like that.

When the seller returned, she continued to waffle and drag her feet until the 60 day period to open a dispute ended, at which point she flat-out refused any sort of compensation for the time or materials necessary to fix the dress. She cut off communication entirely. There’s nothing more I can do to her at this point – I can’t even leave a review to warn other buyers away from her.

I think as women, we’re socialized never to make a scene, real or virtual, and to always give the other person the benefit of the doubt. That kind of behavior can and will be taken advantage of by unscrupulous Etsy sellers. I definitely felt as if opening a dispute or continuing to push for a refund after she’d offered a solution was a major breach of etiquette even though others assured me I had every right.

Basically, regardless of your situation, there’s only one way to protect yourself on Etsy: open a dispute at the first sign of trouble.

Even though I have proof that the seller changed her mind about the refund as soon as the dispute period was up and did not send items/refund them when she said she would, Etsy does not care. They will not help me and expect empty platitudes like “we’re investigating her business practices” and “we’ll be making a note on her account” are proper recompense.

I also can’t guarantee that the support team will actually be able to help you if you do open a dispute in the allotted time. They even sent me an obviously copypasta’d letter that made reference to my sister, who is deceased and was never mentioned in my correspondence with them. The so-called ‘supervisor’ blew off his mistake when I called him on it as a mere “confusion.” I don’t care if you use a template letter if it makes your life as a customer service rep easier, but please use an actual template letter, not an exact copy of something you sent to another customer.

Needless to say, even though I really want to support small businesses, I am never ordering anything over $40 from any Etsy seller I or my friends can’t vouch for ever again.

Looking for a starter LARP dress but wary of Etsy? I highly recommend Moresca’s Cotte variations. They’re reasonably priced (more so than most dresses on Etsy), high quality, are ready for your own embellishments, and come from an established vendor.

Obviously most Etsy users are honest, but there’s no true safety net when they’re not.

Have you ever been in Etsy hell as a buyer or a seller? Tell us about it in the comments below!