The second collected volume of the Image Comics mythic western, Pretty Deadly Vol. 2: The Bear, begins with the friends and family of the fierce, loving matriarch Sarah gathered around her deathbed. What unfolds is not, as would be expected, a story about Sarah herself, but about her son Cyrus (only a child in Vol. 1), the march of time, and the meaning of war. It is a complicated, oftentimes prickly narrative filled with the complexity writer Kelly Sue DeConnick is known for, richly illustrated by Emma Rios’s gorgeous, hallucinatory artwork.

[Discussion to follow will contain spoilers for Pretty Deadly vol. 2.]

Time and its inevitability is a central theme in this book, and time has been accelerated from the previous volume for the sake of story. Sarah now seems immensely old, on the verge of death, her children fully grown. Cyrus has left home to act as a soldier in a foreign war—the first World War, though the entire setting has a dreamlike quality to it that is kept deliberately vague—and his reasons for leaving home are never completely spelled out. Cyrus mentions the desire to run, but whether from something or to something is never really made clear. 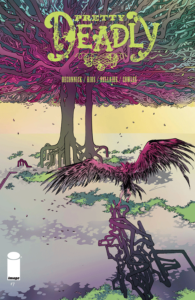 Sarah dies, she makes a request to see Cyrus one final time and so the Reapers of Cruelty and Vengeance, Big Alice and Ginny, are dispatched to bring him home. The story that follows is a somewhat roundabout meditation on the meaning of war.

The strongest parts of the book are those where the characters already established in Vol. 1 are reintroduced, and DeConnick touches on the concept of the natural progression of life and death. Sarah is a particularly compelling character- it’s a pity a larger part of the story wasn’t dedicated to her. Fortunately, with the circular nature of time in the Pretty Deadly universe and the emphasis on mythic storytelling, there is hope that we may learn more of Sarah’s story in the future.

War- What is it good for?

For now, though, we’ve been given Cyrus’s story and, while there are poignant moments, he is somewhat less relatable than his mother. Perhaps it is because he played such a small role in the first volume, or perhaps because we are thrust suddenly into the middle of Cyrus’s war with very little context as to how or why he’s there, but it’s difficult to develop a rapport with the character. Unfortunately, this makes the things that happen to him later in the story have less impact than was intended. 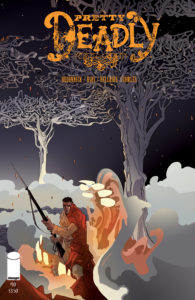 Similarly detached is the character of the Reaper of War, who is introduced as the effective antagonist of this tale. The Reaper of War is, as DeConnick puts it, “hate driven by fear.” Operating from this conceit, that the concept of war is “hate driven by fear” reduces the terrifying complexity of actual war, which is often motivated by a wide variety of causes such as pride or greed, many of them operating in tandem. The Reaper of War appears to be pure concept and not character; seemingly there only to make a point while all other Reapers in the story are fully realized individuals. This makes this Reaper more of an abstract villain and causes the confrontation between Cyrus and the Reaper of War to have a different impact than what might be expected.

Overall, Pretty Deadly Vol. 2 remains a beautiful book full of lovely poetic writing, characters that could be carved straight from myth and legend, and panel after panel of artwork worthy of being framed in the best cutting edge galleries. The story is not quite as strong as that of the first volume, but it is still an engaging read. DeConnick and Rios have simply taught us to have exceptionally high standards; let us hope they continue to deliver.

(I received a copy of Pretty Deadly: Vol. 2 from Image Comics for review purposes.)

About Joie Martin 5 Articles
Joie is a poet, writer and editor as well as a longtime LARPer, costumer and console gamer. She has been cosplaying since 1999 and has worked professionally in the theater industry and as a private seamstress. She has also written, co-written and edited LARP and tabletop systems for various game companies and served as a game director or primary staff member for a wide variety of LARPs.