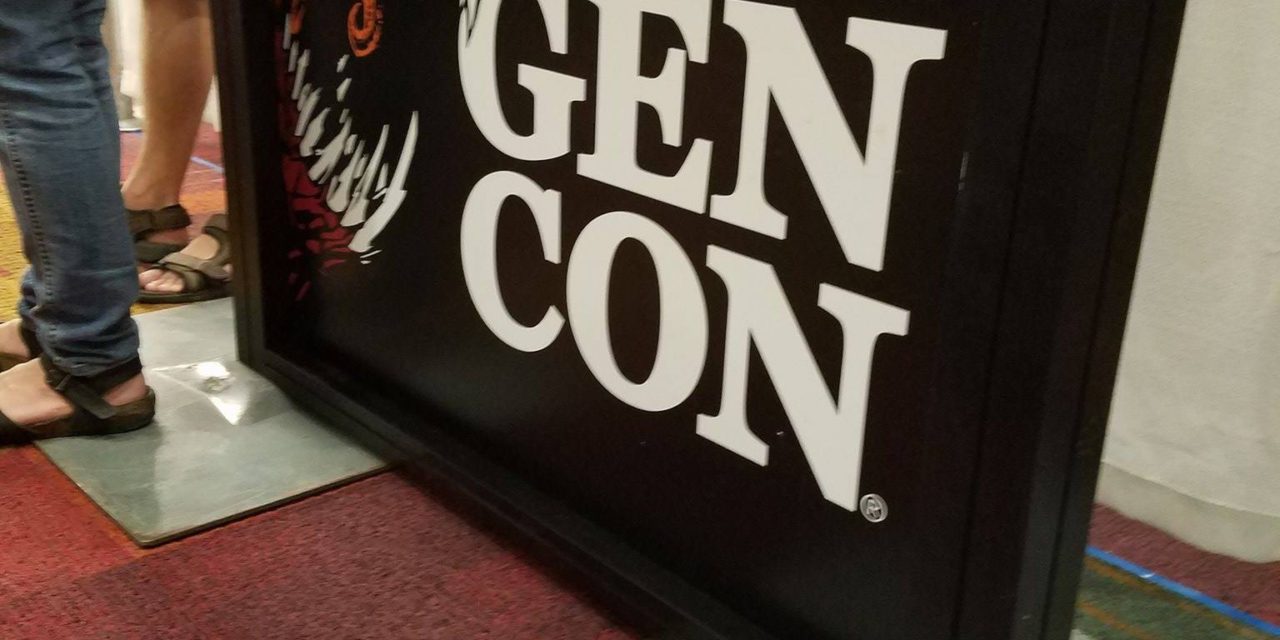 But let’s not get too worked up, though. I’m not new to conventions, just gaming conventions. My usual scene (back in the day) was anime & cosplay conventions, as well as some professional conferences.

Helluva four days, friends. Not surprisingly, I’ve got some opinions regarding this primo trip.

Let’s start with some basic observations about what sets Gen Con apart from other conventions. 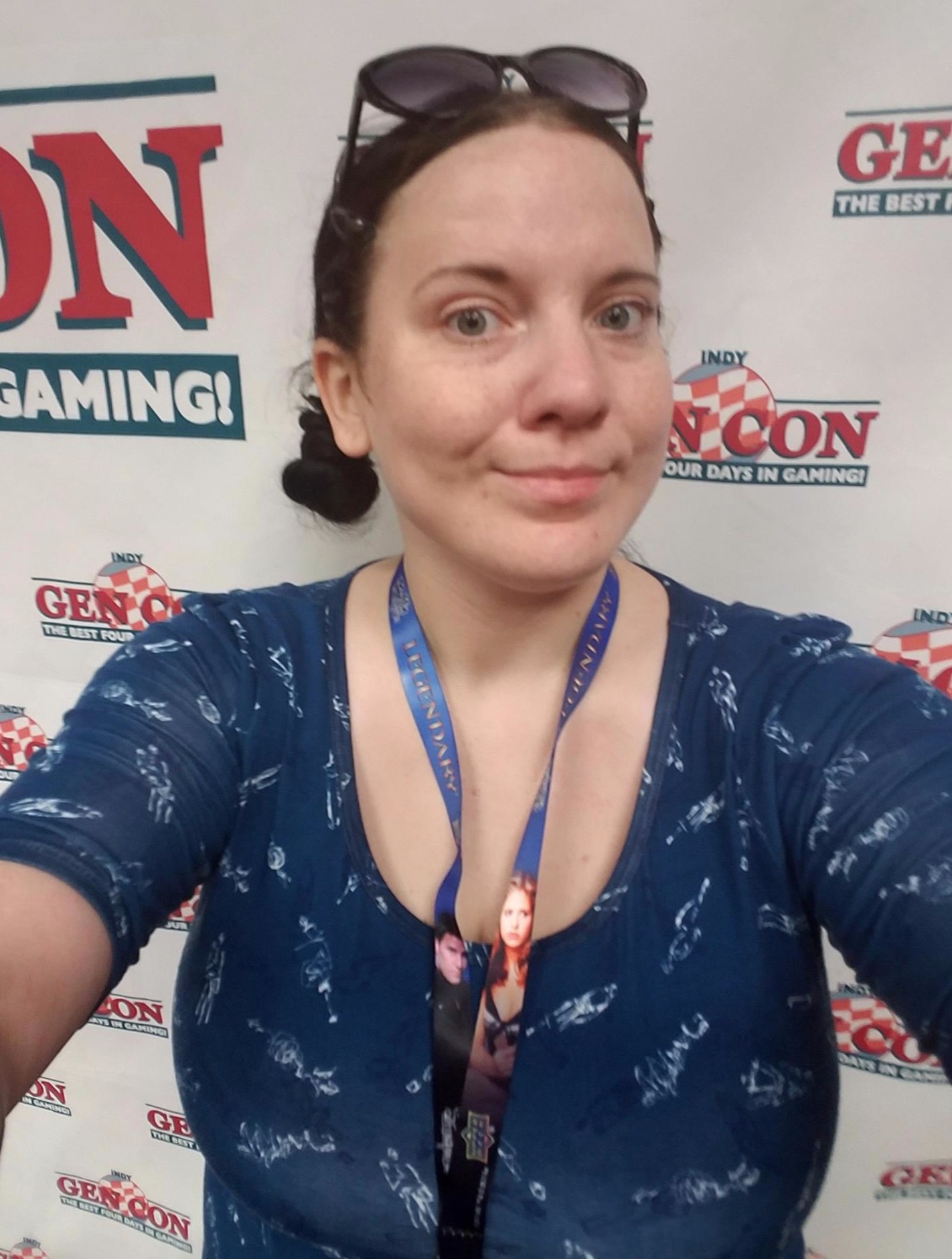 Selfie in the Press Room! Notice that thanks to the lanyard, I got to carry Buffy and Angel around on my chest for the convention.

Most conventions I’ve been to are a short weekend gig.

You arrive Thursday evening (if you’re lucky) and the actual convention and events thereof run Friday AM through midday Sunday. Somehow, Gen Con managed to score a sweet extra day and their convention starts on Thursday! Whaaaaat.

And not Thursday night, either! Thursday bright and early in the AM. A coveted whole additional day.

I do understand that at first glance, one day might not seem like a huge deal, but honestly, it was everything. I managed to get so much more out of Gen Con than I have other conventions just based on that extra day alone.

I don’t know how they did it, but Gen Con’s extra day is pure wizardry. 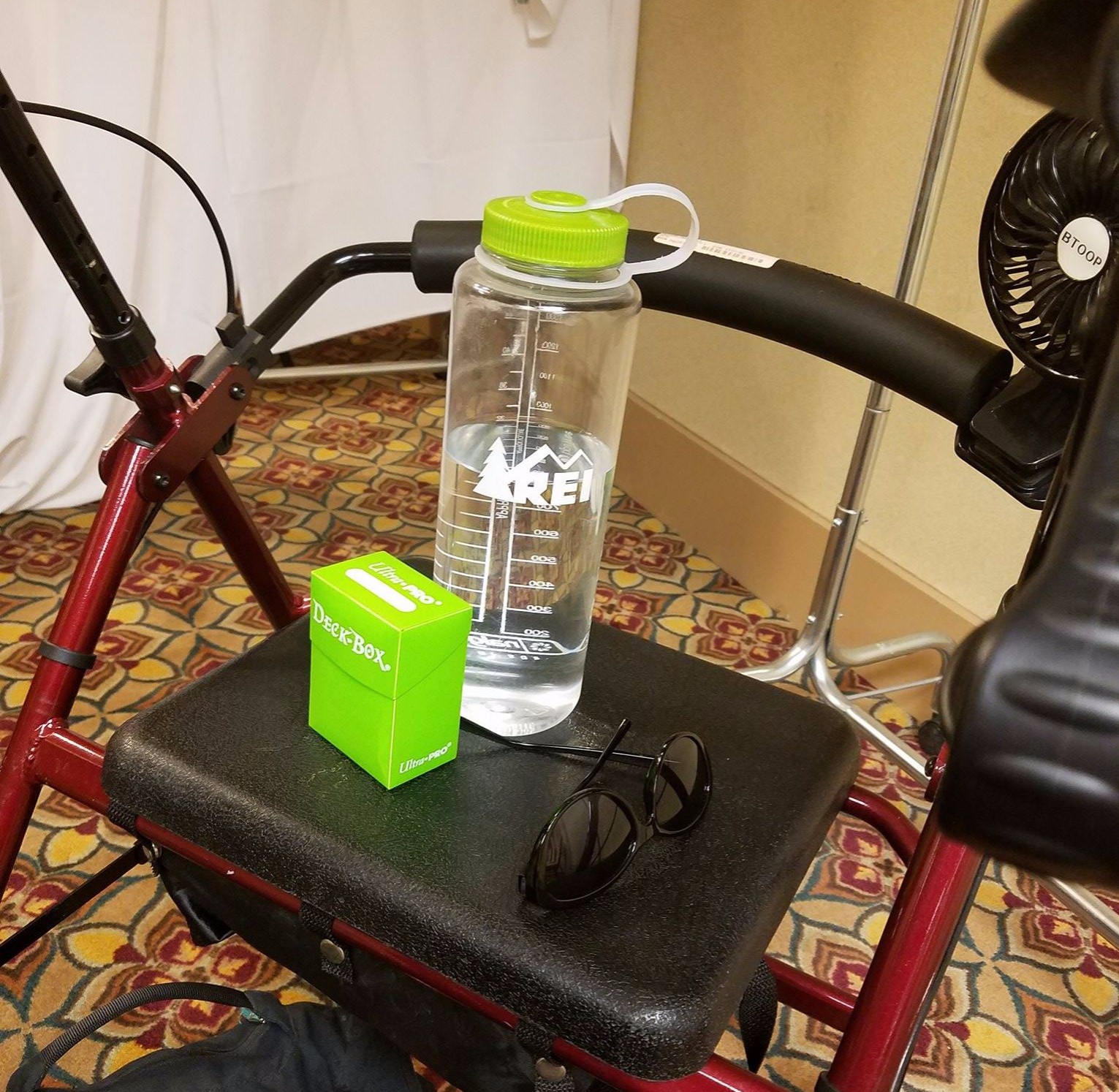 My most common companions: walker I could sit in, giant Nalgene Silo of water, MTG box I kept business cards in, and the portable fan I call my Service Fan (his name is Btoop and he’s the best).

On our arrival on Wednesday, we immediately sought out the Special Services booth in the central portion of the convention center to get my disability services set up. This was my first convention with mobility aids which ranged from my normal cane to walker with a seat and a wheelchair.

This booth was the equivalent of finding a chest of glowing, beaming pirate treasures, but without curses or traps! They were happy, helpful, and non-patronizing people.

I informed them I needed disability accommodations. With no questions or judgment, I was handed a blue band to wear on my wrist to designate that I was to have access to disabled facilities, seating, etc.

Not only that, they had one of the staff “runners” (their word, not mine) get my Will Call tickets so I didn’t have to stand in a long-ass line when I was already in excruciating pain.

And admittedly, as far as the convention center itself goes, there were places where I did have to go a bit out of my way because an escalator was broken or my walker wasn’t great on escalators. But mostly, after asking for directions, I was able to find accommodations/elevators/help elsewhere.

It also helped to see tons of others with disabilities. It’s a nice reminder that you’re not alone and that disabilities don’t have to stop you from doing what you love: throwin’ dice and killin’ monsters ‘n’ that. 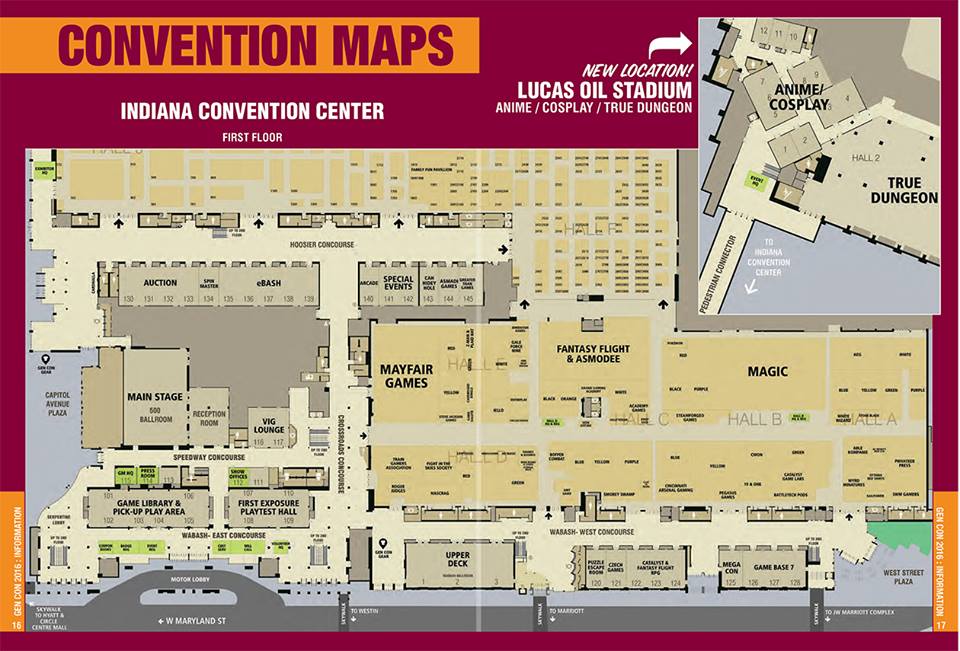 Part of Gen Con’s map from 2016. Seriously though, click the interactive link above to get an even better idea.

Despite having my phone and Google Maps, we could not figure out where the Indianapolis Convention Center was.

That’s because as it turns out, the Indianapolis Convention Center is a weird, unconventional lie. Here’s a detailed map specifically for Gen Con 50.

Everywhere I’d been for conventions, from DC to Virginia to Baltimore, had one or two skywalks to a select hotel or two. Those connected hotels were not part of the actual convention. Mostly, they were just where con-goers stayed.

Ultimately, none of my prior conventions or convention centers prepared me for the massive, town-sprawling connectivity that is the Indianapolis Convention Center (ICC), which is not only connected to multiple hotels, event complexes AND A WHOLE MALL. All of these are attached by skywalks.

With the ICC, everything was not only connected, but hotel space (ballrooms, conference rooms, etc) was utilized and contracted for convention use. That’s part of the reason the event list is so massive (and it truly is astounding). There was space for anything and everything.

This is a blessing, but it also usually means you will get lost ALL. THE. TIME. if you’ve not been to more than one Gen Con. From what I’ve heard, even a lot of veteran Gen Con goers still get lost.

Mostly, I just usually left super early for events I needed to get to. That helped. And cursing. Cursing helps, too.

This was another new experience for me.

Other than occasionally having to sign up for tickets for events like concerts (which were part of conventions), I never had to have tickets to get into anything at conventions. You show up to the panel/event/what-have-you, and sometimes wait in line. If the event fills up, you just don’t get in. There were also very rarely additional costs besides initial badge costs.

Honestly, I’m still undecided whether I prefer Gen Con’s system or not, but it seems to work well enough. Here’s the breakdown.

Then, a few months before the convention, events are listed and you rummage through the THOUSANDS of events and add your event choices to your account’s wishlist.

Then there’s a day where you submit your wishlist and you’re added to the events so long as there’s room in the event. This day isn’t a great time. There’s a massive server load because tens of thousands of people try and log on at the same time and get the events they’ve so carefully curated for their Gen Con.

Then, you pay for the tickets for the events you managed to get into. Said tickets can be picked up at Will Call or can be mailed to you. Event prices vary. If you’re crafting, they usually cost more due to supplies. Some games cost nothing, some cost something. Some cost more than you’d expect.

When you get to Gen Con, you can also purchase “generic” tickets at Will Call for $2/piece. If you show up at an event and there’s an opening, you give these generics to the GM or event manager for however much the event costs.

Seems a bit over the top, but I do think that this system seems to have eliminated a lot of the dreaded, stagnant con-lines that would otherwise crowd and fester hallways and foster heavier clouds of con funk.

All lines I did see had a staff member with a sign that said “LINE ENDS HERE” with an arrow pointing down. This too was another excellent mechanism to keep lines ruly, moving, and people out of walkways. 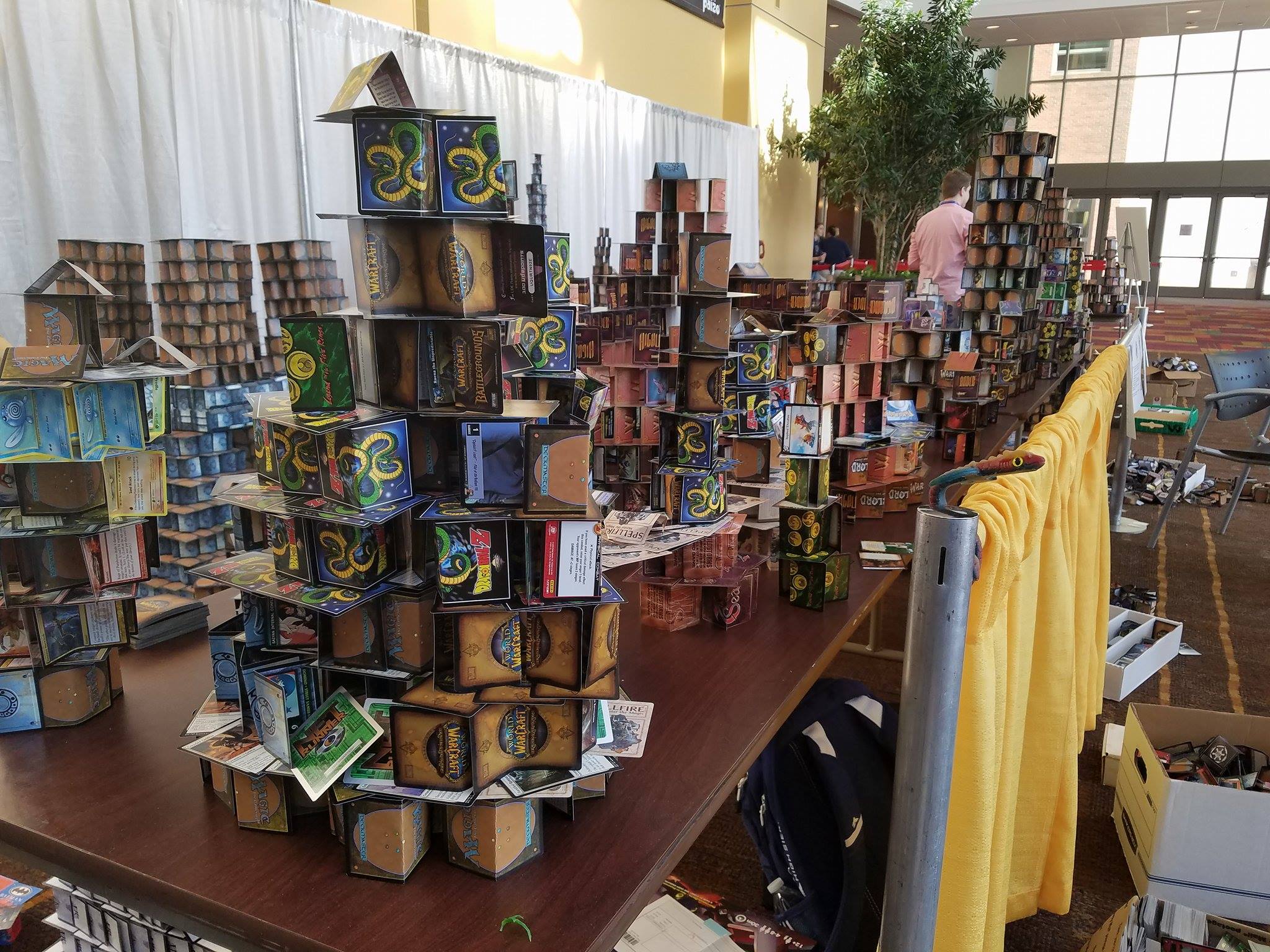 One of the most beloved and innovative methods of charity and giving at Gen Con is Cardhalla. This year was Gen Con’s 19th run of Cardhalla.

Cardhalla is set up in a main hallway with boxes of donated common cards from all trading card games. Throughout the convention, anyone can stop and build card houses with these cards. By the end of the building period, huge card houses and towns have erupted and dominate the hallway.

On Saturday, during the auction, the first coin toss to destroy Cardhalla is auctioned off. The winning bid this year was $2589, with Cards Against Humanity adding an additional $1000.

After the first toss, everyone tosses coins to finish “demolishing” the city. The final count of collected coins was $1206.20. Total, Cardhalla alone raised $4795.20 for this year’s charity, which was Child Advocates, which is an organization dedicating to protecting and serving abused children, including accompaniment in court and finding safe housing.

Amazingly, this isn’t even the only event that Gen Con holds for charity. They also auction the right to slaying the annual balloon sculpture, charity auctions of rare and exciting items, as well as Nerd Night for Charity and the Ace of Aces auction.

Annually, Gen Con changes the charity they donate to equally distribute among the community.

This is terrifically inspiring for convention. Not only is this a giant convention with a giant membership, but an ever-giving heart. I’ve seen some conventions give some of their wealth, but to have so many facets and methods of donation, and to actively engage their community to participate in these events… it’s compelling and unparalleled for any convention I know of.

I had some other grandiose experiences that I’ll be sharing in the upcoming days that I’m calling “Critical Rolls.” Keep an eye out, more soon!

Geek’s Guide to Hooking Up at Conventions and LARPs 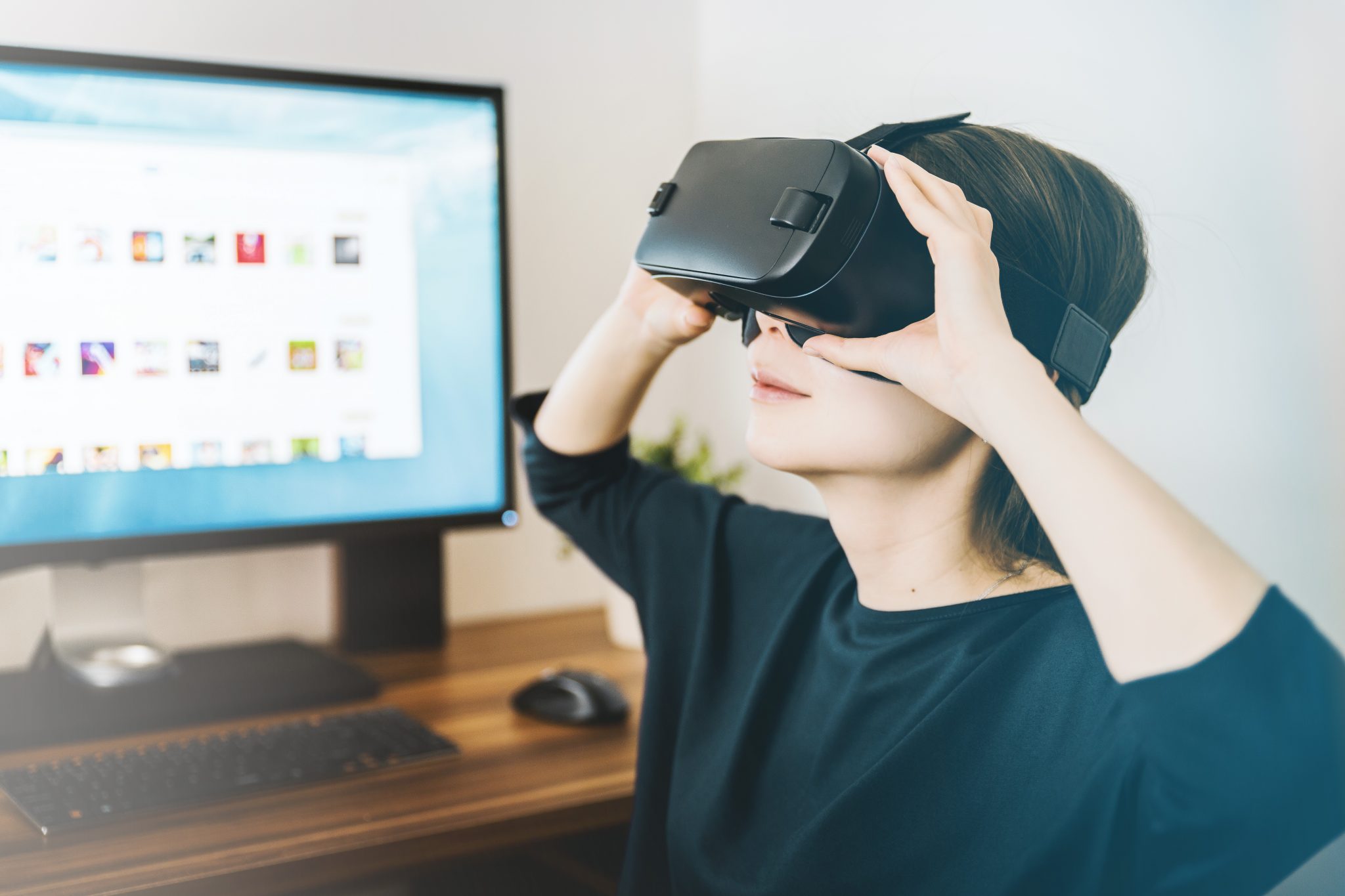 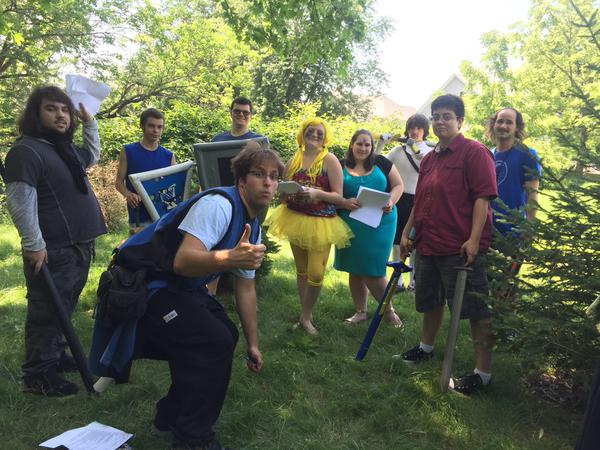 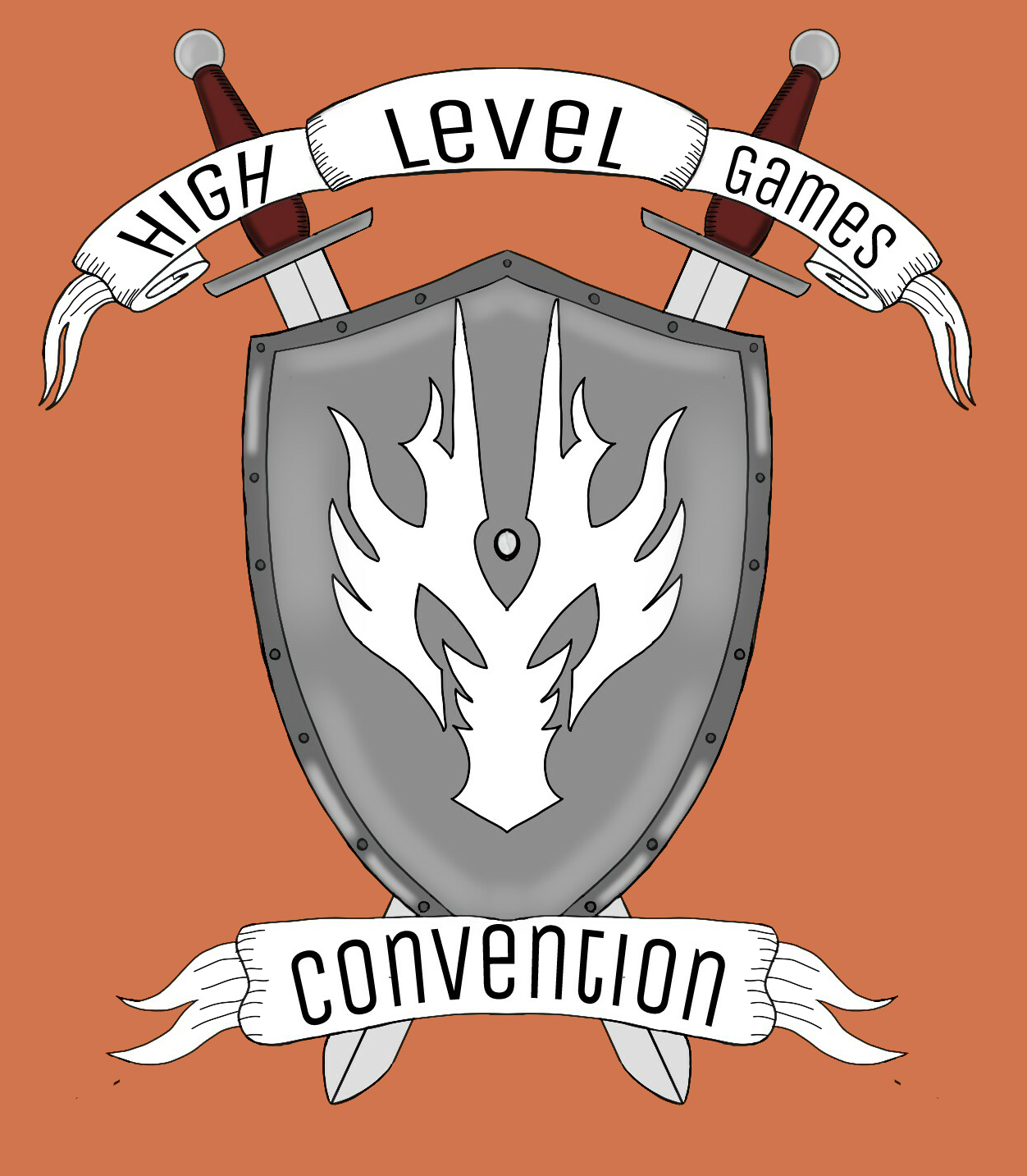