Dragon Thrones is a gaming event coming to Bryn Mawr, PA, USA in July, 2017. As a LARPer (live action role player) extremely interested in political and military-oriented role play, Dragon Thrones caught my interest immediately. However, this experience goes beyond your usual LARP, and incorporates other elements and mechanics – such as an integral strategy map – to provide focus and realistic representation of world-changing events.

Billed as a “MegaGame hybrid,” Dragon Thrones aims to provide something very new to the blockbuster LARP scene in the US. This is very much at the forefront a trend to combine the most successful elements of multiple types of role playing games to maximize the value of the players’ experiences.

At Dragon Thrones, your successes and failures have visible consequences, heightening the level of drama, intrigue, and bravado you’ll find in the setting.

This ambitious and engaging format is the design of Chris Batarlis and Evan Michaels, who together represent The Game Theatre. I asked Chris and even about their previous LARP and interactive theater experiences, the Dragon Thrones gameplay experience, and more.

Tara M. Clapper: Tell me about more about the types of interactive theater experiences you’ve run in the past.

The company began as an espionage (James Bond 007) inspired casino LARP that was held in various secret bars and lounges underneath Manhattan. However, based on the unique experience of producing a “Theatre LARP” in Manhattan the ‘Game Theatre’ was born as a way to unite people of different backgrounds and interests into an singular immersive role-play experience.

Your readers can learn more about what is ‘Game Theatre’ HERE.

TMC: Many people are curious about the game play. Is the map like a tabletop game? Is the full experience more of a LARP?

CB & EM: Dragon Thrones is a Larp-MegaGame Hybrid. The LARP element means players physically embody their characters and act out their decision making and character personality. Players will remain in character both while engaged in social strategy and while gaming. The MegaGame is a massively scaled war map game where teams can compete, or make alliances, in an attempt to unite all of the magical Dragon Thrones.

For beginners, this can be simply explained as follows: you will be taking on the role of a High Born character of importance who will have special responsibilities for your Kingdom or Clan. This could be a royal adviser, a manager of treasure and gold, a diplomat, a spymaster, or a general for the warp map. You a free to pick and choose what you would like to be involved in as well. What happens between you and other players can affect yourself, your team, and maybe even change the course of the entire realm! Likewise, what happens in the war game will affect the realm as well. These designs compliment one another so you will feel like you are in one castle set within a massive fantasy realm that exists outside of its walls and can be seen and monitored on maps.

For experienced LARPers and role-play gamers, we can explain Dragon Thrones using operative game design terms as follows: players will LARP with various objectives, and these objectives can be achieved through resource trading with other players. Resources will be gems and other similar artifacts that represent your degree of skill in certain areas. Additionally, LARP will be combined with social deduction mechanics when teams enter into diplomatic council meetings to cast votes (with possible hidden traitors in the midst) to deal with issues throughout the realm. Meanwhile, the war map MegaGame is essentially “Mega Risk” where area control will be the main mechanic. Fog of War will be utilized, so you and your team will only be able to see the portion of the realm where you actually send scouts or troops.

TMC: For someone who usually enjoys fantasy boffer combat games, why should they play?

CB & EM: These is no boffing at Dragon Thrones because the weekend is a royal summit where High Born teams are trying to outwit one another to become the dominant power in the realm of Cambria. But, by no means does this mean there are no battles to be had. Instead of player-on-player combat, teams will have thousands of troops outside of the castle in other areas of the realm to do battle. This will create the feeling of large scale total war outside of the castle itself. We believe fantasy boffers would enjoy the feel of total war, as reflected on the war map. Dragon Thrones presents a change of pace, not very bloody to the player but very bloody “in story.” The opening of Game of Thrones is one of the shows best features! Dragon Thrones offers an opportunity for boffer LARPers to combat in different ways, through interaction, team-building, and various forms of game strategy. Outwit your rivals in the castle and lay waste to your rivals homeland outside of it!

TMC: Do you have alternative options for locals who do not need to stay overnight?

CB & EM: Yes, we have commuter options and can be contacted directly at: info@thegametheatre.com

However, there will many evening features once the MegaGame rounds have ceased for the day, such a mini in character RPG games called “Night Missions,” casino card gaming for gold, and even a (potential) Draconian ball. Scheduling and some features are still subject to change as the production progresses.

TMC: Are there set game off times, or does play happen around the clock?

CB & EM: There are game off times depending on where you are on campus. First, in the dorms and dining hall people can be in character or break character. These are not strict “in game” locations, and some dorm and food areas do not have a castle theme. Within the gothic game buildings, such as the Grand Sir Thomas hall, libraries, classrooms, and dance hall, those are always considered “in game” whenever you enter those locations. Also, while traversing the campus on other quests you are “in game” as well. One positive is school will not be in session and this is also an all girls college, so players will be accepted and will not have to worry about comments from athletic teams or others on campus who do not understand LARP. Bryn Mawr is super inclusive and comfortable for everyone!

TMC: What does your character creation process look like? Do you assign characters and kingdoms, or do participants make characters themselves? What types of questions are participants asked?

CB & EM: We have an experienced team of LARP writers creating customized character roles, complete with name, history, and objectives. We will assign these roles to players after they complete surveys. The first survey allows players to pick their team preferences. The later surveys will ask questions that will allow us to cast players into a preferred archetype roles (i.e.general, spymaster, diplomat etc.) Dragon Thrones is all inclusive, including character roles.

CB & EM: Yes, because they can choose to what degree they want to be involved in any feature. Game Theatre’s objective-based systems compel social interaction between everyone. For example, a Nordic LARP’er may have an objective that they must locate a forbidden love, so they emotionally role-play what it’s like to face family rules and and societal customs that they do not agree that prevents them from being with their chosen partner. However, they do eventually succeed in running away with their ‘soul mate’ and now must choose where to flee to… what Kingdom may accept them without persecution? They then locate a welcoming Kingdom but that region also happens to be under attack in the war game and it’s no longer a safe haven. Essentially, free-form LARPing can be affected and react to what will feel like real world events outside the scope of their control. Dragon Thrones is a massive canvas for free-form role-play for those who desire it. However, some suspension of disbelief is required as tabletop mechanics will influence the story as well.

TMC: How extensive is the rule set? Is it easy for new people to learn?

CB & EM: Dragon Thrones does not use a rule book or design document. Rather, it employs easy to learn, objective based systems that will be taught to player guests the first day. These include the player to player item exchange (skill use) system, the MegaGame round based system, and most specifically, what precise responsibilities your archetype character role has in the experience. Dragon Thrones will also thematically instruct players about the various LARP and gaming features through class instruction on the first day. For example, a General will attend a military academy class to learn how to place, move, and use troops and heavy military equipment in the war map game, while Diplomats and Spymasters will learn the systems of diplomacy and politic in another class, whereas Masters of Coin will take an economics class on how currency works in the experience. Classes are attended in character and make learning Dragon Thrones exciting by removing the need to review and learn pages and pages of rules. Of course, video instructional may be potentially published a week or two beforehand.

TMC: Is the game purely political, or does it involve any kind of mechanic for military, action, spellcasting, etc.? How does that work?

CB & EM: Dragon Thrones is not purely political, there are major military elements in the war game, and there is limited magic as well, say less that Lord of the Rings but more than Game of Thrones, a nice balance. The political element will determine what alliances are made, what information is traded between Kingdom and Clan teams, what treaties are entered into, and what global resolutions are voted up or down. Meanwhile, the economic element will determine how a team’s gold is spent (military, repairs, payoffs etc.). The heavy war element will be teams deploying various units to take or defend land in an effort to capture magical Dragon Thrones. Finally, spellcasting can be used affect natural elements on the war map, heal the wounded, entrance the minds of others, create boss monsters, and control and manipulate the Dragon Thrones themselves. 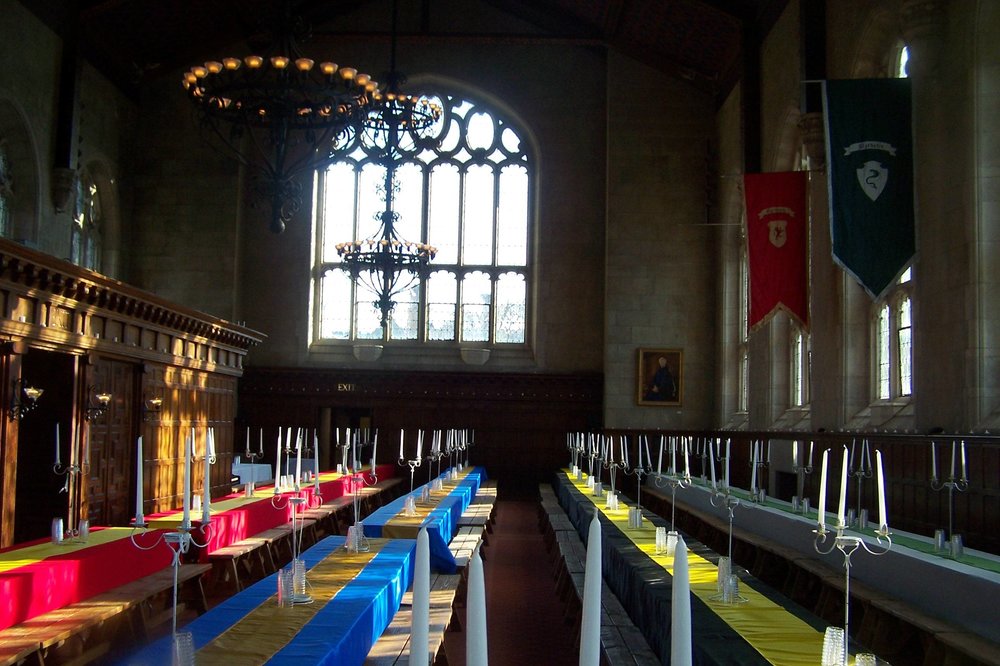 TMC: The people in your preview trailer have some truly amazing costuming. Where should a new player get started when it comes to garbing up for game?

CB & EM: All players will be provided with a tabard or cloak that reflects their team’s coat of arms (seal) and colors. Players then are free to wear additional consuming that reflects their character, or can wear neutral clothing underneath the provided tabards / cloaks. Neutral clothing would be boots, black pants etc., jeans, sneakers, or loud clothing (sports team jersey etc.) would be discouraged. However, Dragon Thrones encourages fantastical cosplay for those interested and capable. We may also publish links to reputable retailers offering budget conscious costuming.

TMC: What’s the best way for potential players to reach you if they have further questions?

Or, potential players can complete out application on the website so our experience experts can consult with them about the weekend.

About Tara M. Clapper 289 Articles
Tara is a lifelong geek and the founder and publisher of The Geek Initiative. Her interests were forged in an early appreciation for "Star Trek: The Next Generation," "Jurassic Park," and many historical fiction and fantasy novels. Tara is a game designer, LARPer, and frequent convention attendee. The author of over 1,000 individual blogs, her content has been featured on HelloGiggles, nordiclarp.org, LARPing.org, and The Billfold. She holds a B.A. in English from McDaniel College and has attended many events as press (including New York Comic Con). Tara has a professional background in marketing and publishing. She lives in the Philadelphia area. A Marvel fan, her favorite superhero is undoubtedly Thor. View her portfolio at: tmc.pressfolios.com.